Every morning, I spend some time reading posts on Hacker News. And every morning, I know I've spent more time on it that I intended to. It's the same (worse) story with Facebook.However, Hacker News has an amazing feature to help ensure you don't overstay on their site. Here's how it works: 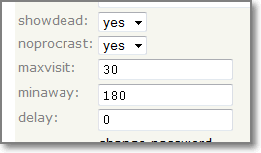 You simply enable anti procrastination (noprocrast) in your settings, specify the maximum time you're allowed to spend (30 min in the screenshot) during each visit, and the minimum time between consecutive visits (180 min). So, with my settings, I can't spend over 30 min at a time on Hacker News, and I can't visit it till 3 hours are completed since my last visit. Now you know why I wish Facebook had this. Here's what you get if you try and break you self imposed exile (click on image if it's not clear):

Google Reader & Bookmarks don't seem to speak to each other ?

I use Google Reader for all my RSS feeds. Typically, I devote 30 minutes every morning to reading - and bookmark anything I think I might need later. I use Google Bookmarks to (duh) bookmark stuff.

In the bottom of every article in Google Reader, there's this:

The button I'm missing is 'bookmark'. I assume there are millions of others who do the same thing - read...and...bookmark. Hence, it's rather difficult to imagine that Google wouldn't support this! They have a bunch of complicated 'Like' & 'Share' options that no one I know uses; bookmark should be child's play?

Right now, if I need to Google bookmark something, I click on the article's headline to open it in a new tab. Thereafter, I click the Google Bookmark button (rather, bookmarklet). I'm sure there must be a way to avoid this unnecessary step of opening the article in a new tab (having read it already in  Google Reader). I even tried a Greasemonkey plug-in for Firefox.

Any suggestions? Please tell me I'm not the only person facing this?
Posted by Lux at 11:05 AM 0 comments

Breathe life into your software. Give it 'personality'

More often than not, the warm fuzzy feeling you get from using a piece of software is NOT the result of one "mother of all features". Rather, it is the cumulative effect of a lot of  little features - all of which add up to infuse 'life' into your software and give it a 'personality'.

You probably knew this already!

But when I got a cute little warning while using Gmail, I couldn't help but replicate the warning - to get this screenshot:


(please click on the image below - to see what I mean) 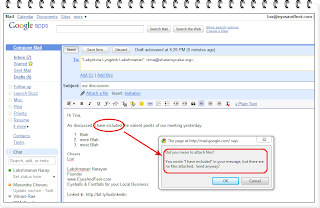 This week, I visited Digg after a long time. It isn't like it was before - but that's a different story altogether.

Interestingly, there's a digg in almost every section (technology, gaming, etc) mentioning LivingSocial. The thumbnail features a girl(s) in a bikini or something similar - basically, something that's a definite attention grabber...

After encountering a few of these (and a couple from Groupon too), it struck me that these are sponsored posts!

It appears the Daily Deals companies like LivingSocial & Groupon are all over Digg! I'd love to know how effective this really is? Any ideas?
Posted by Lux at 8:30 PM 0 comments

Alpha? Beta?Theta? What do we call our software release?

OK, so we're closer to release, and in a week, we'll request five restaurant owners to play around with our application at www.eyesandfeet.com/Some-secret-location/

Only, we've got a semantic problem! Is this release a prototype, an alpha or a beta? A private or closed beta perhaps? Or maybe a pre-alpha of sorts? What about the next release?

Is it even good luck to use greek alphabets anymore considering the way the Greek economy is going? Is Chinese the new Greek? After all, the Alpha-Beta nomenclature for software releases happened only because IBM simply decided to use what they had in place for hardware.

Our understanding of Alpha & Beta was further clouded by Google's liberal use of the Beta tag before 2009 (before they started going after Microsoft's business customers). And then, Flickr even had a Gamma release!

Here are a few things we learnt. You may find them useful:

Interestingly, Google redefined Beta so much that 'Perpetual Beta' found its way into popular lexicon - with O'Reilly throwing their weight behind it.

And never one to mince words, Jason Fried wrote about it and a Jason (presumably Fried) writes in the comments of the same article: