Here are the top Spas & Salons in Las Vegas that do their social media in style. We've also provided a brief summary of our take on what they do, that's different - beyond the regular special offers and greetings on Bad Hair Day.

Want to know more about local businesses rocking social media in your own neighborhood? The Free EyesAndFeet application has the details.

PS: we haven't included the big chains (Supercuts, GreatClips, etc) in this list - it just wouldn't be fair.

Read on...to get some ideas on how you could engage with your followers - in hair raising ways. 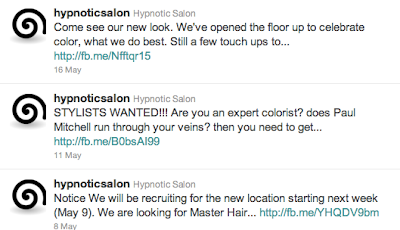 One glitch though we that we noticed in some of their posts is that, they just give the links and don't say anything about it. This may not be a nice idea on twitter!

Interesting news around the business establishment is always a great way to
engage with your customers. Although in twitter numbers, 39 seems like a small number we feel that this salon will grow fast!

With a steady flow of specials, offers & replies this Las Vegas Super Star tanning salon is the top individual Spa & Salon on twitter. Like Hypnotic Salon, many of their posts springboard off Facebook. 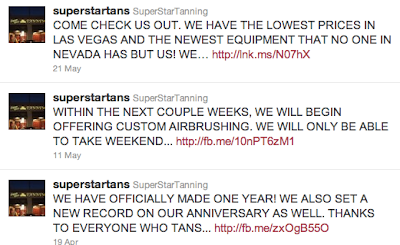 Check out Eyes And Feet for more.

Here are 10 (based on number of followers) Bars & Clubs in Boston that do their social media in style. We've also provided a brief summary of our take on what they do that's different - beyond the regular special offers and greetings on Mother's Day. Want to know more about local businesses rocking social media in your own neighborhood ? The Free EyesAndFeet application has the details.
PS: we haven't included the big chains in this list - it just wouldn't be fair - or interesting for that matter. So there you have it: all independent establishments!
Read on...to get some ideas on how you could engage with your followers.
And...Congratulations to these Twitter Rock Stars:
#10 @Tremont647 - 1030* Followers

A tight bond between your Email, Blog & Social Media campaign is always a great strength #constantcontact.

Specials & More specials in their tweets.

Twitter is the easiest free platform to spread news about your events , and that's a great way to ramp up followers - hopefully, following you into your bar.

Yummy tweets and fiery comments mentioning many of their interesting cocktails comprise many of the tweets from this Boston bar.

Most people struggle with using #Hashtags effectively. But this Boston BU Central bar seems to have figured it out pretty well - with tags such as #undergroundmusicfest

Ask questions and you will get responses on twitter. The Greatest bar have a nice balance of replies and tweets that helps keep their conversations ticking. 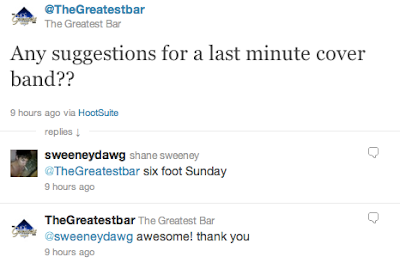 UEFA Semifinal? The Lansdowne's followers probably know where they need to head out to!

"@" mentions is always a nice way to appreciate group of people and make useful connections on twitter. This Boston bar spreads the word with tweets like the one below:

#2 @ParadiseRockClb - 3298* Followers
This rock club has some rocking promos for their events with timely tweets to pull in the numbers. 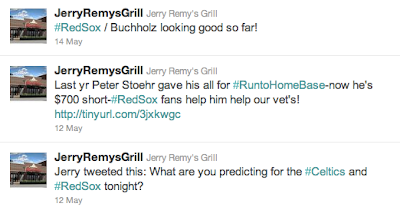 Check out Eyes And Feet for more on local business' social media in YOUR neighborhood.
*Followers as of 24th May 2010
Posted by Vikram at 6:35 PM 0 comments

Over 2800 Restaurants & Cafes in San Francisco are active on Twitter...
Who's doing what - in your neighborhood? The Free EyesAndFeet application has all the details!
Here are the top 10 (based on number of followers) restaurants that tweet, along with a summary of what they do that's unique and beyond special offers and greetings on special occasions. And just to keep it fair, we haven't included the big chains (McDonalds, Starbucks, etc) in this analysis - so there you have it, all independent establishments!
Read on...to get some ideas on how you could engage with your followers.

Established only in 2010, this Filipino eatery has risen very fast to reach more than 3600 followers. They tweet often about their events, specials, current location & also use hashtags rather well.

This high end restaurant and wine bar not only tweets about what happening in its own business, but also leverages current happenings in their tweets (The Hangover - 2, for example).

The Luna Park Restaurant is proof that it pays to keep your social media strategy simple and interconnected. They put up events on Facebook & tweet about them on twitter. 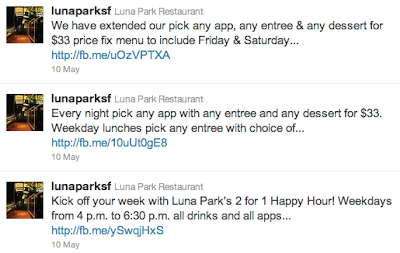 An interesting Tweet-a-day keeps your followers happy. Slightglass' tweets are a mix of events, pictures and quirky tweets like the one below.

This restaurant smells like ham in most of its tweets! With interesting pictures and posts they have their twitter strategy - well thought and hand crafted.

In twitter it's all about connections. Adobo Hobo tries to stay abreast with customers and other businesses - with tweets mentioning them such as the one below:

Sometimes, it's not what you say, but how you say it that matters! The 21st Amendement uses twitter for the same things most local businesses do, but their tweets have a nice way of engaging people, as the tweet below shows.

They seem to want to teach the world what Gratitude really means through their interesting "tweet-series", The Self Examiner Weekly : http://conta.cc/mDBLxN

Wow! Though it's not always about numbers, with more than 300 thousand followers, this ice cream place rocks on twitter. Besides mentioning their interesting flavors on offer, they do 'the usual' - reply promptly and announce specials & events at regular intervals. Kudos to San Francisco's No: 1 eatery on Twitter.

Check out Eyes And Feet for more on local business' social media in YOUR neighborhood.